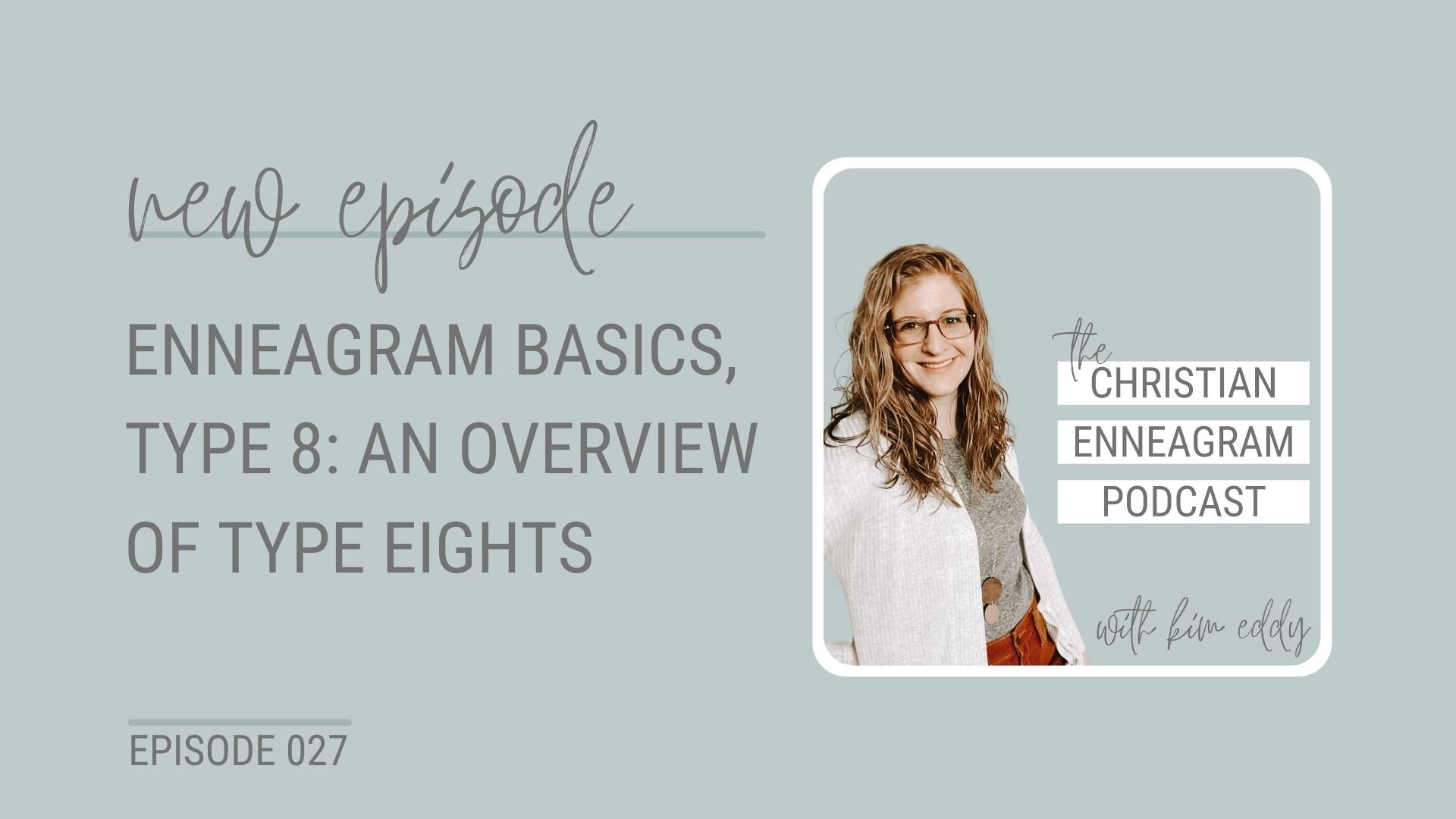 Hello, welcome to Type 8’s Basics introduction post! This is part of a 10-post series all about the Enneagram basics. If you want to know some of the terms and definitions I’m using, you can go to the Enneagram Basics Intro post which just covers how I approach the Enneagram, what it’s made of, and the definitions of the terms I’ll be talking about. I’m going to move through these quickly so that we can get all the way through. If you are a Type 8, or you know a  Type 8, or are just curious about the inner experience of a Type 8, then I encourage you to read this post. A lot of what I’m going to be sharing comes from my book, “The Enneagram for Beginners” if you want to read that and go a little bit deeper.

So let’s get into Type Eight!

Type Eights focus on self-reliance, being independent, having strength that you need to get through life, and making things happen. They share these traits:

These traits, especially regarding conflict, are not shared by all the other nine types, so sometimes it can cause a little bit of friction in a Type Eight’s relationships. Type 8s can come across as a little intense, aggressive, or reactive to other Enneagram types, even though that isn’t their inner experience of themselves. Underneath all that confidence and passion that we talked about, Type 8s struggle with fear or aversion to seem weak or vulnerable, open to being harmed or attacked. In some way, they believe deep down that they are really only worthy of love and approval if they don’t show vulnerability and lead with power.

There is another belief that is very tied to the thought that they must not be vulnerable, and from this underlying belief comes the motivations that we’ll talk about in a minute. A Type Eight’s underlying belief is something like, “It’s not safe for me to be vulnerable or to trust anyone too much.” This belief causes Type Eights to run towards their desire because they are trying to feel okay.

Other desires that Type 8’s have are…

Now, while they are running towards all of those desires, they are also running away from their equal opposite.

We call these things Type Eight’s fears, and those would be:

In the middle of their desires and fears is this friction point that is sometimes called “the passion” or “the sin” of each type, but I don’t like those terms. I see it as a struggle, because you are stuck between chasing after your desire and running away from your fear. For Type 8, we in the Enneagram business called that struggle lust, but really it’s just going after intensity and gaining power. Remember, this is power to avoid being vulnerable; this isn’t power to control other people, but to avoid being controlled. This intensity, this power of pushing against boundaries or exerting control over others is in order for a Type 8 to protect themselves, and it all falls under that lust category.

These are the motivations that we see in Type Eight, and that’s really where any behavior that you might consider stereotypical (although I don’t like that word) comes from, because those motivations are what make them a Type Eight

Now let’s take a look at the wings. For a Type Eight the possible wings are Seven (8w7) or Nine (8w9). You don’t have to have a wing, but if you do, these are some ways that your wing can add some color and nuance to who you are as a Type 8.

An 8w7 might come across as a little more blunt and outgoing, and a little less wary of being controlled. They tend to be more relaxed and “in the moment”, are more social, and want others to be as direct and assertive as they themselves are. On a bad day as an 8w7, or when they are struggling, they become a little more impulsive, impatient and reckless in their choices or behaviors.

Now let’s look at an 8w9. This type is a little more emotionally compassionate, steady, grounded, and measured. They give off  vibes of being more approachable than an 8w7. On the other hand, when they are having a bad day, they can have an unpredictable temper, and might feel very torn between showing up aggressively to respond in anger or wanting to keep the peace and push down that anger.

So that’s a very brief look at the wings. If you want to know what the wings are–their terms and definitions– I just want to remind you that the Enneagram Basics Introduction post [insert link here] is a little ways back and has that info.

Let’s look at the levels. You can bounce around these, so they are more of an indication of where you are at in the moment: are you living intentionally? Are you responding to life (which would be very healthy) or are you reacting to life out of your normal coping mechanisms and patterns (which may be average autopilot’s or unhealthy)?


So we’ll look at healthy first because we all want to strive to be there.

When Type 8s are  living from a place of intentionality, then they really focus on how they can use their unique abilities and power to fight for the underdog, to bring justice to people who need it, and to fight for people who can’t fight for themselves. They take off their emotional armor when they are living from a healthy place, and they allow those who are close to them to really see them. At this point they are opening themselves up to a little bit of possible harm, but they are really leaning into the strength of being vulnerable and allowing themselves to be fully seen.

Moving down a little bit, Type Eight’s start to believe that they can’t open themselves up to other people; that they aren’t safe unless they have that protective armor around their emotions. At this point, they “put on” some of the average or more autopilot reactions as they are responding to life, and might start to use their struggle with intensity and desire for strength to intimidate those who might harm or have harmed them. They lean into the communication style of interrogation to get any answers they need or the response they are looking for, and might also struggle to follow other people. Aggression and anger can become their emotional armor, which can lead them to not be able to feel or see other people’s emotions very well.

When we move down even one more, we go to the unhealthy level. We never want to be here, but it’s important to hear it so that we can know when we are here, notice it, and make a different choice. When a Type Eight truly believes that they have to exert power and control over their environment so that it doesn’t do that to them, they focus more and more on protecting themselves from potential attacks and might start to assume that other people are going to betray or control them. At this point they may begin to make their own rules, throwing out other people’s rules and expecting them to get on board with them and their new rules. They also might reach out for revenge when other people don’t live up to their expectations or when they hurt them.

Again, this is not a place we want to be, but you might be able to notice when you’re being pulled down there or falling down into those less than healthy, more unhealthy patterns if you know that this is where you can go.

Now I want to move on to the growth and stress points for Type Eight. There are four of these points, but we only have time today to cover two of them.

In growth, Eights move to Type Two on the Enneagram, and in stress they move to Type Five. This is not where motivations change; they stay a Type Eight, but can kind of reach out and grab some of those behaviors, depending on what they are looking for, and it’s kind of an automatic response. This is another thing that can be helpful to know what it looks like, so that you can see kind of where you’re at. When experiencing growth, this isn’t spiritual growth or really even personal growth, but more a feeling of being able to get out of the comfort zone a little bit and wanting to try something different. It is feeling comfortable in who you are as your type.

For a Type Eight, a growth line looks like taking on some of those healthy traits that we see in Type Two:

Now let’s talk about stress. I like to think of the stress line as if your normal coping mechanisms or patterns of reaction are not working, and you’re still feeling stressed and overwhelmed.

A Type Eight will “reach over” to the autopilot or average traits of a Type Five and see if that works any better:

Again, this is not a good place to be, but it’s an important pattern that might be present that you might want to notice so that you can avoid it.

Get the Enneagram + Relationships PDF

Get all 45 type combinations, with strengths and areas to watch out for, straight to your inbox! You'll be added to the Ennea-notes list for weekly encouragement and resources, but you can unsubscribe anytime.

Thank you! Check your email for the link to the Enneagram + Relationships PDF.

I promise to NEVER send you any spam - but you can always unsubscribe with one click.

The last thing I want to talk about in this post is subtypes. I know I’m going rather fast, but I wanted to keep this brief so that you could get all of it in sort of a snapshot view.

An SP Type 8 is more focused on obtaining the things they need in their environment to feel like they are in control of their own safety and life, which might feel like building a personal “castle” of some kind. They are more practical minded, resourceful at getting the things that they need, and often very good at “haggling” and getting a good price.

This subtype will come across as more loyal, outwardly mellow, overtly friendly, and helpful. They also step in for the underdog as a gut reaction, but are a little less likely to give in to anger. They are concerned with the injustices that happen to people and society.

Enjoy this post? Have a question? I’d love to hear your thoughts in the comment section below or over on Instagram where I hang out the most.
If you haven’t yet, grab a copy of The Enneagram for Beginner’s book (affiliate link, thank you for your support!) or you can shop through my favorite books and resources for using the Enneagram in the Amazon Storefront.
Want to purchase Enneagram stickers, hats and more? Click through to the Christian Enneagram Shop and check it out.

Check out the other posts in this series: