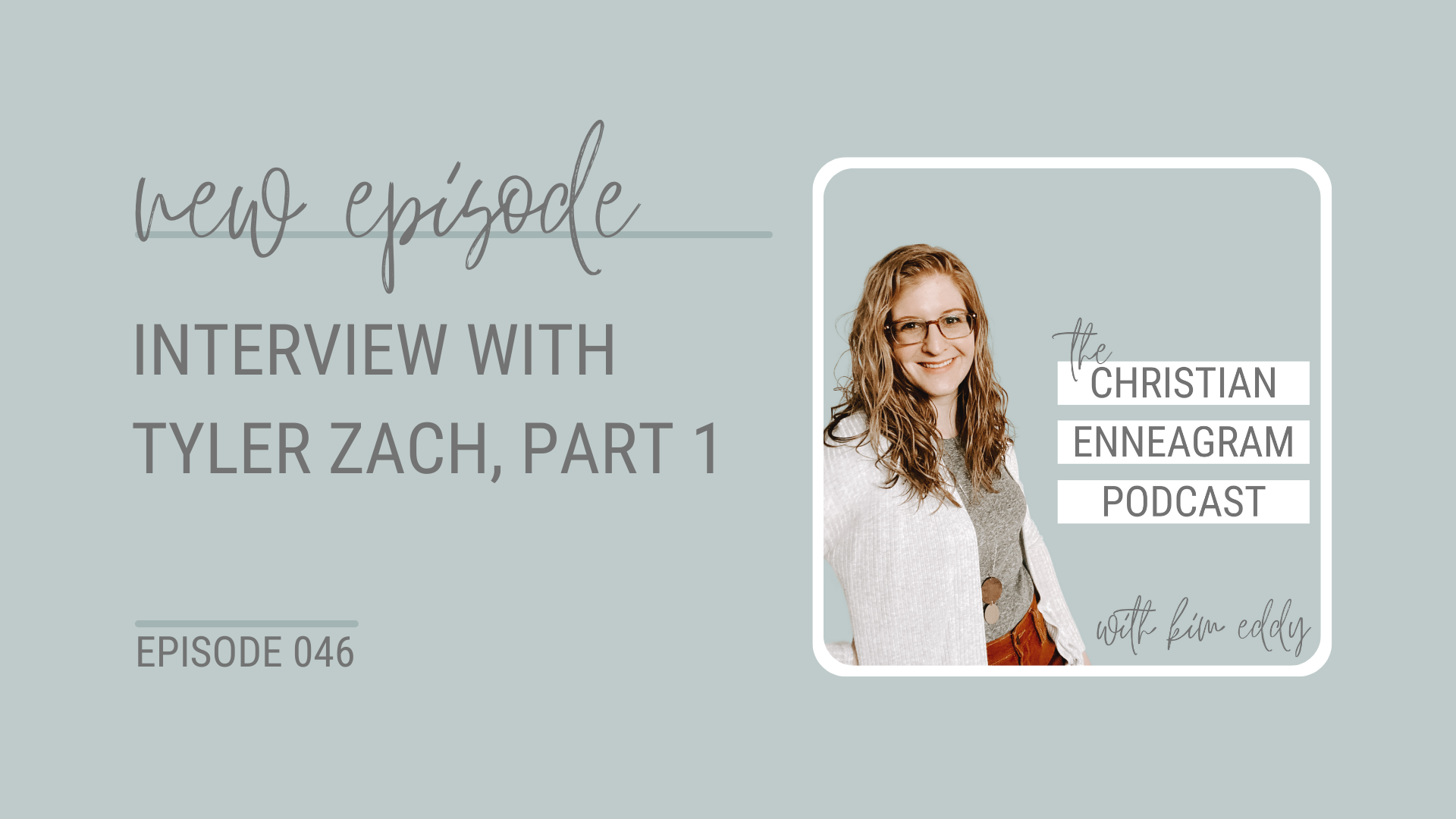 Today we are going to be talking to Tyler Zach, who I have become friends with through social media, and I am just so excited that you’re here. You have so many important things to share, and I want to make sure that we get into that, but first, what is your Enneagram type, and how do you most like to help people?

It’s great to be on your show, Kim, I have been big fan. So I am a three wing four, and in kindergarten I got “Entertainer of the Year” so I was a three from very early on! One of the things I love about being a three is that ability to read the room and know how people need to be encouraged in the moment. I also just love calling out greatness in people, and contextualizing the gospel; making it relevant for others. Those are just a couple of reasons why I love being a three.

Now, what do you do in your day to day? What pays your bills?

I am a pastor. I originally did campus ministry for about nine years with CRU Campus Crusade, and primarily worked with fraternity and sorority students. I then went down to K State for a couple of years and was the campus director there, and then got invited by my friend, Gavin, to be a church planter. So I just kind of moved into a pastoral position here in Omaha, Nebraska, and was on staff, growing that church, and then went on to plant a church in 2015, which is kind of a fun story!

In 2019 we actually merged with a multi-ethnic church, and so I actually co-lead the church with my friend Jameson, who’s a type eight. So we got a three and eight co-lead combination there.

Well, thank you! Thank you for introducing yourself a little bit and helping us get to know you.

There’s multiple things I could pick, like the kindergarten story, but I think I’d go back to my fraternity days in college. You know how threes like to be chameleons and sort of shapeshift, and turn the color of whatever group they’re part of; and so when I joined my fraternity, I went all out: I wore the fraternity shirt all the time, ended up being the president of the fraternity, got my license plates that said SIG Up on it; everything was SIG Up. I became the poster child for SIG Up! I had the blonde frosted tips, the hoop earrings, the Pooka shell necklace, the visor…

My first semester in the fraternity, I took a leadership position as a treasurer and raised funds for our end-of-the-year formal. I didn’t know that they actually selected a fundraising amount that was much higher than usual, thinking that we weren’t going to attain it, but I thought, “I can’t fail! I need to raise up this amount of funds as the treasurer.”

As I was getting near the end of the semester, I was like, failure’s not an option; I need to raise the full amount. So I was going in and giving plasma to raise money to get to that goal so I would not fail! They were pretty impressed with me by the end of this semester, that I raised up all all the funds! And we had a great formal.

So, so literally like giving away part of your body to avoid failure. Wow. Okay. Yeah. I can see that as a Most EnneaMe Thing. Amazing, thank you so much for sharing.

I found that having a little bit of humor with it, laughing at ourselves, helps alleviate some of the difficulty of looking at our Enneagram type, and I think it has a lot of good things when we can have a little humor in how we view ourselves through the framework of the Enneagram. So thank you for helping us get to know you a little bit.

How Tyler Found the Enneagram

How did you find the Enneagram, and what was your first impression of it? What did you think about it?

I learned about the Enneagram from a friend when I was scrolling through a church booklet of his and saw the Enneagram in it. He kind of explained that the church was going through it with their leaders, and I decided I wanted to look into it.

I literally Googled “gospel Enneagram” on YouTube, because I was just wanting to know who was using it while also teaching it from a Christian perspective, and I came across John Fusha who was running Gospel Enneagram and has a company called People Launching. So I became friends with him, and he was my coach; I went through his certification track to get certified as an Enneagram coach, and so that’s just kind of a quick overview of how I got into it.

Using the Enneagram as a Pastor

As a pastor, I imagine that you spend a good amount of your working time walking through hard moments with people, really meeting them where they’re at and showing love to them in a way that edifies and helps point them towards truth. How has the Enneagram helped you in your role as a pastor?

There are several things:

You mentioned being people smart; I think type threes are often automatically people smart, but more about people’s expectations of them, being able to feel the room, know what’s going on and, and how they should “show up.” How would you define the difference between this kind of “people smart” and being able to authentically connect with others?

As a three, I know I can feel and sense what people need or want to hear, and I can operate out of being the friendly pastor that knows exactly what people need to hear, versus the pastor who is people smart: understanding why they are feeling the way they do, or maybe some of their idols or defense mechanisms going on, and then having to speak truth into their life even if I know it’s going to cause them to be disappointed in me.

Oftentimes threes love through doing, so we see people and we can pick up on things they may need or want, and love by doing.

When I say people smart through the Enneagram, I mean being able to see them “in color”: see their problem or situation and navigate things differently than we would normally do. If threes don’t do the work of understanding their emotions, their competency and their capabilities will be years ahead of where they’re at emotionally.

Emotions are not aerodynamic; they slow us down. So threes oftentimes take our emotions and put them on a bookshelf and don’t come back to them, and therefore we are not emotionally mature unless we do the work.

As a pastor, yeah, you can see what people need and what they’re going through, but if you’re not emotionally mature, you’re not going to be able to understand or know how to help them navigate through their emotions. You might help them to have hope and look to God and sort of move on and have hope for the future, but you won’t be able to do that deep work that they need.

I’m a pastor’s kid myself, so I’ve seen the deep importance of pastors seeing their own blind spots and shoring up support, not just in their personal lives, but in their professional lives and; making sure that they don’t remove who they are from the equation of pastoring and ministry.

I’d love to know how that has helped you, being able to see your own blind spots, or being able to know what kind of support you might be avoiding or might need, especially because of the Enneagram. What has it been like for you as a type three, in seeking or understanding that need for support?

One of the themes other guests have brought up is this empathy that the Enneagram can bring, but it’s also this empathetic mirror to ourselves that that shows us where we might need some help.

I think you touched on that about yourself, as a pastor or just as a person, but also in your relationships; how you’re able to view the wholeness of other people and accept the wholeness of yourself and not give any justifications or excuses, but also not belittle others or yourself. That’s one of the themes I’ve seen from people who have done the Enneagram work and have really studied and learned about themselves and studied and learned about other people and how they view the world.

I just need to know, would you recommend the Enneagram as a tool to other pastors?

Oh, for sure. I’m going to keep recommending it. We’ve just got to get over that hurdle of “the origins” and make sure that we can be confident in using it not even just for the congregations, not even for premarital counseling, but even for us as pastors.

We know the Bible inside and out as pastors, but there are so many ministry leaders that lack self-awareness; we have so much God-awareness, Bible-awareness, but low self-awareness and that influences and permeates churches and church culture. I think, just in terms of the leaders, we would be a more healthy church if we utilized the insights of the Enneagram.

That is part one of my conversation with pastor Tyler Zack. He’ll be back on next week to continue our conversation and get deeper into some of his research: into the origins of the Enneagram, and his line of type-specific devotionals. We will see you then!

Tyler is currently writing 40-day Christian devotionals for every Enneagram type. Published books include Type 1, 3, 4, 6, and 9: Check them out on Amazon.

Because some Christians are skeptical of using the Enneagram, Tyler’s written a PDF resource called “Should Christians Use The Enneagram?” which you can download for free on his website www.gospelforenneagram.com.