The Enneagram and Apologies, Part One 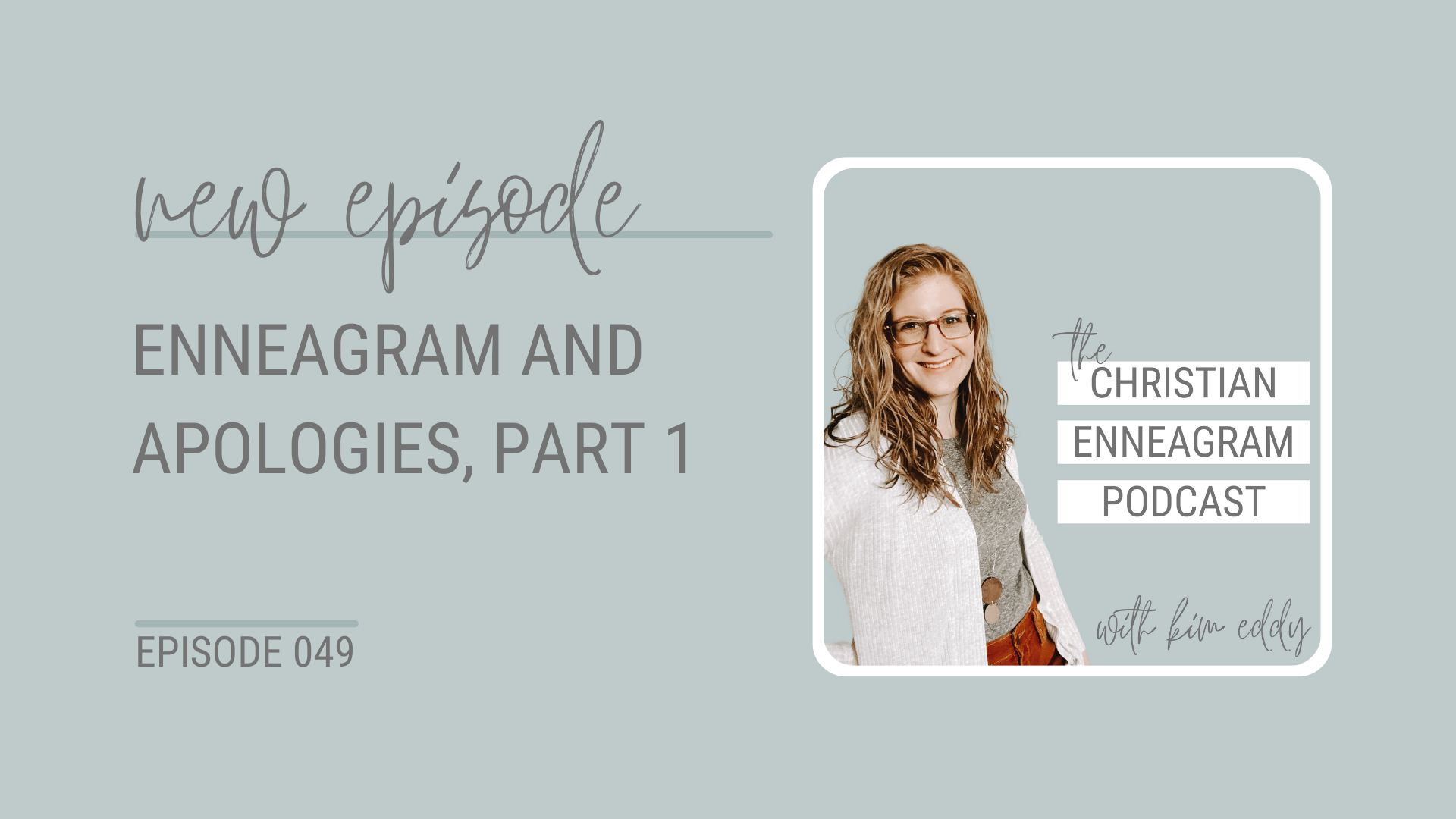 We are going to be starting a short series about apologies today, and will touch on a few ideas around that:

As Christians, we really love to talk about forgiveness, and it’s good that we love it; there is something beautiful about forgiveness and the way that it can bring people together and cover over a lot of the things that can happen in relationships.

One thing that I think is sometimes missing from the conversation in a really deep way, though, is apologies. We don’t really like to talk about them as much, and we definitely don’t put language to them or give practical advice around them very often. What I wanted to touch on was a few things that I think are important when we have a conversation around apologies, and why apologies might be a hard topic for us.

In my mind, there needs to be a robust understanding around apologies, as well as a practice around apologies and repair when it comes to relationships. Without that robust understanding and practice, we can put ourselves in danger of “weaponizing” forgiveness, whether against ourselves or against other people; when we take a fractured approach to forgiveness, it “cuts both ways”.

When we think about God forgiving us as humans, it’s usually a one-way street as far as the actual forgiving goes. It’s a guarantee that we can have faith in; but it also comes from this idea that we can’t do anything to make it right, which is why forgiveness is so necessary.

Basically, there is nothing that we can do to earn that forgiveness; there is no way that we could act, no way to “apologize enough”, so to speak, to have deserved being forgiven by Him.

Right! If you know the difference between works-based vs. grace-based forgiveness, then you’re probably familiar with what I’m talking about. Part of asking forgiveness from God in that way is this recognition that we don’t deserve it; we were never going to be able to avoid it, and we are unable to, in and of ourselves, tangibly repair what we’ve done. The only way to be forgiven by an all-powerful, immutable, omniscient, omnipotent Creator is for that Creator to choose to forgive.

That is really beautiful news, and is a lot of what makes Christianity, Christianity; knowing that God does forgive.

Is there a difference, then, with how forgiveness is supposed to work person-to-person?

I think so, and I’m going to give some examples why. When it comes to person-to-person forgiveness, we can either feel entitled to forgiveness, or we can feel coerced into forgiving because we unconsciously extend those same ideas we have about how God forgives us into our human to human relationships.

Here are some examples, dramatized for effect:

Example One: When I Hurt You

If I hurt you, I can feel like I ultimately deserve your forgiveness; in my mind, it should be guaranteed from you! I should be able to judge you if you don’t forgive me, because I can point to the right Bible verse that has to do with how you should behave: you should forgive me, and I shouldn’t have to do anything to repair it because I’m not perfect, anyway! I am a human, and I make mistakes! There is nothing I can do to repair it. Therefore, it is on you, another human in this scenario, to offer grace and mercy to me in this moment; and if you don’t, you are not living out the character of God, so now you’re in the wrong, and you might need my forgiveness now.

So you see, this can become ammunition if, if somebody is in our mind withholding or being slow to forgive. This is an extreme example, of course, but that script that I articulated can be present in some form, but hiding beneath our spiritual beliefs and the things that we believe about God. We sometimes point at other people and say, “You should be that way too” and we start to become, like I said, entitled to that forgiveness, or to reconciliation, making things be the way the way before and as if that hurt that I caused never happened.

We can basically expect people to not just act like God in how they forgive us, but we can expect them to actually have the capacity to be God in the way that they forgive us.

That is so intense, but I can totally see how expecting forgiveness like this is expecting people to have that same capacity as God.

So I’m wondering if you could maybe dig a little deeper with that; do you think that you would be able to explain the difference between us being like God, which is kind of what we’re called to (walk like Jesus walked and treat others the way Jesus did) but not being God in the way that we forgive?

That is such a good question! I have an answer in a form of another question, things that each person will have to answer for themselves.

There are some ways that we are not called to be like God: we aren’t called to know everything; to be omnipotent or immutable. We are called to be humans worshiping and living for God.

There are things that we see in God-embodied, in Jesus, that are not how God the Creator would be: Jesus needed naps; Jesus often set boundaries; Jesus was human! So my questions-as-an-answer would be:

When it comes to forgiveness, I think it can be helpful for us to understand if we are talking about forgiving hurt, or saving somebody? Because that is a big area where we are definitely not called to be like God.

Those are, again, going to be questions that we answer for ourselves as we work out out what Christianity is to us.

I love that, and I think it’s okay to wrestle with this a little bit. I don’t think that we are supposed to have all of the answers or know exactly what we’re supposed to do; I think actually that could be getting into dangerous territory if we feel like, “I have the answers and I know what I’m supposed to do.”

Example Two: When You Hurt Me

Let’s talk about our second example where I’m the hurt party. Somebody has hurt me, and I feel that I need to offer unconditional, immediate forgiveness, paired with reconciliation, and I should not expect any tangible change, repair, or apology; anything for the other person to be committed to make it right, or to mitigate harm, or to repair, in order to move forward.

I think that, depending on how we answer those questions above, we can be led us to judging others, judging ourselves, and shame in this scenarios: “I’m not being like God! Oh my goodness, what is the matter with me?” My feeling is that I need to be immutable, above the situation; maybe sorrowful that you made a mistake, but mostly concerned about that other person’s healing and repair. I need to be concerned about where they are, but somehow still stay above the hurt that I am feeling.

It can all lead to feeling like this isn’t me; it’s just something that happened that I need to forgive, because my job or calling here is to offer grace. That is my task and calling, is to offer grace without expectations. Because if I did have expectations for my forgiveness, that would be works theology, a works-based relationships or, thinking that I need to save that person, and if I don’t offer grace in the form of complete erasure of the event, I will need to ask your forgiveness for being judgmental, holding a grudge, or being hard-hearted.

Why Apologies are Hard to Talk About

I think a lot of people have experienced both sides, both extremes, at some level. I believe that a lot of this comes from conflating who God is and the beautiful things about Him and how He forgives, and conflating that with how we as humans should interact in apology, repentance, forgiveness, reconciliation and relationships. All of which can make things like apologies and boundaries really difficult things to talk about, because we assume that since that isn’t really how God operates, it shouldn’t be how we operate either.

I’m not offering theological answers to all of this; everybody will have to dig into it, seek out people that they trust, and read up and decide what that looks like for them.

I think that our Enneagram type can definitely influence where we might be on the spectrum as to where we land: Are we having to “be God” in how we get to impart forgiveness upon another person? Or do we try to make others be God in how we say, “Well, I need to be forgiven. You need to be God.” Both are deeply flawed extremes.

I love how you mentioned both of those extremes, and even how you kind of “overdramatize” them because it does make the point that each of these extremes are unfair because they expect too much of somebody: either ourselves or the other person. We are kind of just setting everybody up for ultimate failure.

You are so right, because we are human, and hurt and forgiveness and reconciliation and repair…these things aren’t meant to be used as a testimony to the beautiful things that we see between God and humans: automatic, immediate grace, erasure, and reconciliation. These things are beautiful, you know, but maybe the beautiful things in our human-to-human interactions is in the work to repair, to own what we did or to own the hurt, and then offer forgiveness; not as if we’re above the hurt, but even in the messiness of it. Maybe that’s where we see God at work in our very human, very messy, very beautiful lives.