The Enneagram and Apologies, Part Two 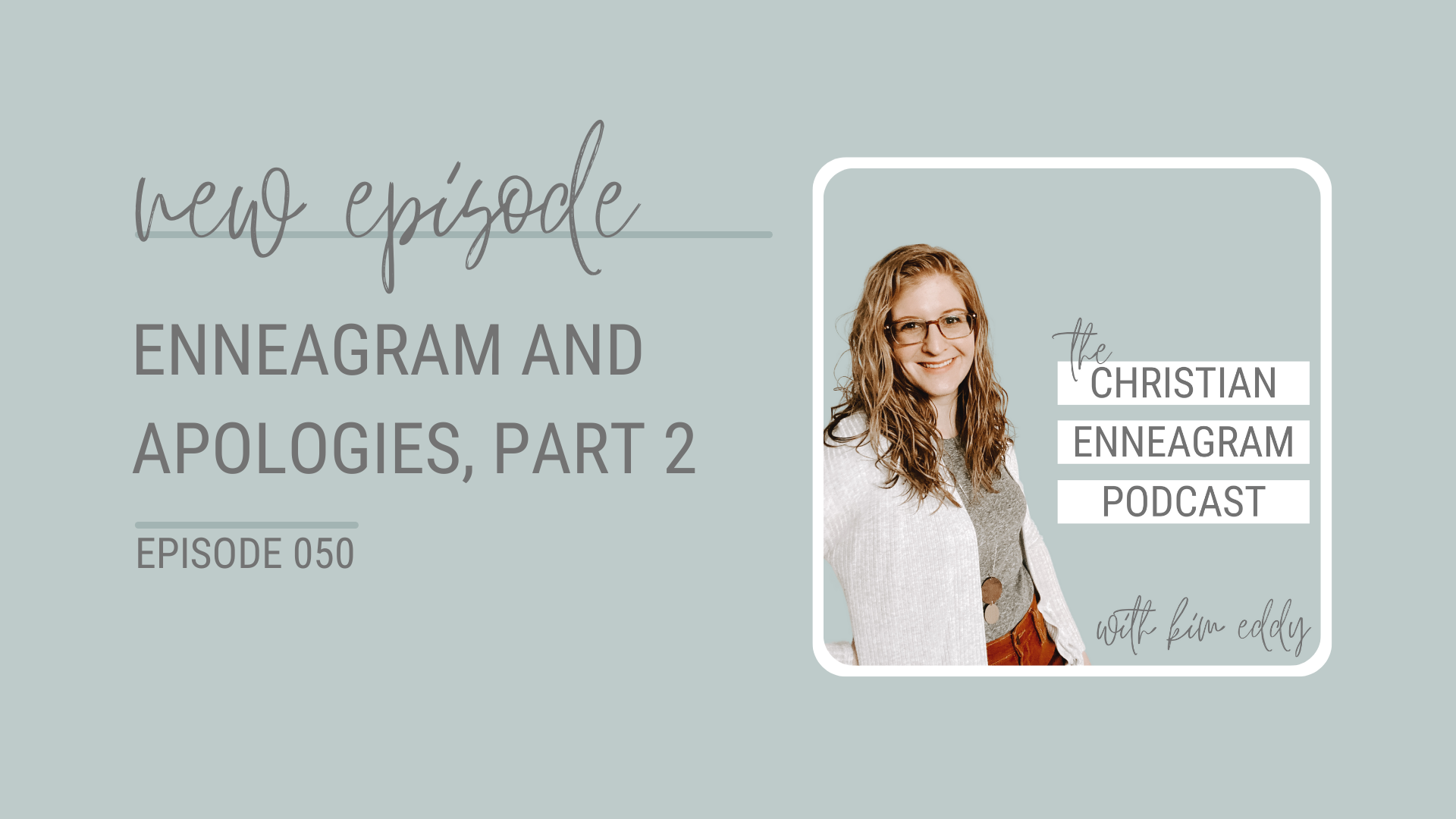 We are going to be hopping back into the conversation that we started last week about apologies! If you haven’t read part one, that was where I talked about some of the reasons why talking about apologies in a more robust and deep way is something that can benefit all of us Christians.

Head to Part 1 to catch up now. The Enneagram and Apologies, Part One >>>>

Now we are going to talk about the practical side of things, putting apology into action!

Parts of an Effective Apology

Association of Psychological Science says there are 6 parts to an effective apology:

Let’s look at each one.

Remember that apologizing as a means to an end, or apologizing as if it is just something you have to do to get to the forgiveness, is not going to be helpful or effective in this. Being willing to express how you feel about the negative impact you caused is really important to facilitate repair, and I think this is an area where we can get tripped up, because sometimes we go into shame, and that’s not what is required here. there should be some form of seeing the hurt you caused and feeling remorse over it.

I do think that some people see hurt, but don’t think that the person should feel that way because their intention was good, but I think that feeling sorry and expressing regret for somebody’s pain can be two different things.

One way to look at this is compassion: I have compassion for the hurt that you are feeling, and I understand that intentionally or not, I was the cause or the instigator of that hurt, and I have to own that.

I think that looking at it from a compassion-to-action type of experience can help us to see the hurt that the other person is experiencing, and if there is an apology necessary.

I think that it is important for us to understand the depth of the hurt that is there and acknowledge it: “I see that you’re hurting; I really, I really don’t want you to be hurting, and I regret that you are hurting.”

2. Explanation of What Went Wrong

Sometimes explanation of what went wrong is as simple as “I disregarded your feelings” or “I reacted harshly”, or sometimes it will take a little bit longer: “I hurt you when I said…” or ” I did this, disregarding your feelings about it, or your boundary.”

We don’t want to go so far into trying to explain away the responsibility we had, but putting words to the circumstance that is causing their hurt or that we contributed to is very, very important. And as far as asking about intention or motivation, this is where you can really turn compassion into empathy, and in many ways your intention will come through more clearly when you don’t try to explain it.

Saying things like “I didn’t want to,” “it wasn’t my fault,” “I was trying to do this and then it did that”… It’s important to explain what went wrong without 1) talking about our intention the whole time as if that should mitigate the level of hurt that they are experiencing, and 2) not going to the extreme of explanation that we are trying to get out of responsibility.

Sometimes we had a competency issue: It was a mistake, we did something wrong that we thought we were doing right, or our intention was good; and sometimes it is an integrity issue. All of these things, if we ended up causing hurt to somebody, should at some point lead us to asking, how can I avoid that?

There are ways that each type can think they are helping, but they are actually crossing a boundary, or they can be doing a nice thing, but disregarding somebody else’s wishes. We can really get ourselves worked up into thinking we’re doing something good for somebody or that our intentions are good, but when somebody is hurt, you have to deal with the wound.

This can also be a really good instigator of self-reflection for us: Why did my good intention lead to this hurt? Sometimes that is something that we need to look at for the future, as a growth area for us.

Remember that honesty is important when we’re taking responsibility. Because forgiveness obtained through dishonesty is really just kicking the can down the road, and it’s going to leave a sour taste in the relationship. No matter the reason, we need to admit and recognize and show that we understand our responsibility in this situation, and that’s going to go a long way for someone to be able to trust again.

You have expressed your regret for hurt; you have explained what went wrong, what happened; you have acknowledged your responsibility in that circumstance that led to the hurt; and now you’re going to actually say “I’m sorry. It was wrong of me to do that.”

We don’t want to deflect number three; we don’t want to say, “I’m sorry for how you feel.” Again, that’s not an apology. We want to apologize for everything that we have explained. Here in number four is where we can also get side-tracked, because sometimes both parties experience hurt from each other, whether it’s because of a miscommunication and overreactions or something else; it’s not always one-sided. What’s important, though, is that the apology be one-sided, not conditional on the other person’s understanding of their responsibility.

Sometimes we feel like we lose power, or the ability to influence the relationship for good, towards repair. We can sometimes point out where they went wrong or how they reacted hurt with hurt, and now we are a party who hurt and is apologizing, but we are also a hurt party who deserves an apology. This is sometimes where we can get tripped up and we can say, “I owned my part. Are you ready to own yours?” So that we don’t mitigate or undo any responsibility we have taken on, I suggest moving straight from step four to step five.

This is where you ask how you can make it right, and what will either stop the hurt or help heal it. If you are expecting forgiveness from them without working to bring them or the circumstance back to wholeness in some way, or being committed to try, then there isn’t really repentance there.

I like to think of it as a debt. So often the thing that hurts someone is because we took something from them on some level: their agency, their time, their energy, their personhood, their autonomy…We either hurt them with our words, made decisions for them, did not hold them with the value that we should as a human…created a debt with our actions and choices. Now, how can we pay it back with interest?

Remember, too, that forgiveness is not the same thing as reconciliation.

I really love how you said forgiveness is not the same as reconciliation, because I think that that can be what we are expecting: you forgive me, therefore we are reconciled and everything is going to be great. I think that if we have in our mind that forgiveness and reconciliation are separate things, then it might even help us to be more willing to request that forgiveness; because, at least for me, sometimes I will feel like I made a pretty big mistake, and I know that things are going to be the same. I don’t even know if I can ask for forgiveness now! But asking for forgiveness is not the same thing as asking that things go back to normal and like it didn’t happen.

I think it can be helpful to even name the fact that their forgiveness does not create any obligation for them to look at the relationship the same, or to go back to the way things were, because I think that there can be a lot of confusion around that. I know for me, before I worked out some of this stuff for myself, if I was asked for forgiveness I had an emotional and visceral reaction, because now I felt like I was commanded to give that in the moment and open myself up to potential more hurt! There had been no time, space, or healing. It is so good to be able to separate what it looks like to forgive and what it looks like to heal the relationship and remembering that sometimes there are going to be scars, because we are humans and life is messy. And if there is a scar in the relationship, it’s going to look and behave and act and just be different than it was.

And none of that is bad; sometimes that’s how grace happens. Even with the scar, we can treat an honor and love and respect each other, even if that looks a little bit different. I think the beauty is that it gets to look different and still be love and grace; it is honestly different, instead of deceptively the same.

That can be really beautiful, removing the idea that forgiveness has to be the same as reconciliation, because we inherently know that they are different. There is a lot of freedom in allowing ourselves to be humans loving and following Jesus in this idea when it comes to apologies and forgiveness, rather than trying to be God-like in how we approach it.